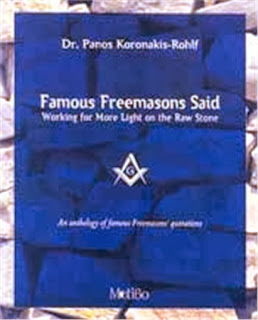 An anthology of famous Freemasons' quotations. The German poet Johann Wolfgang von Goethe, the first President of the USA, George Wasington, the English Prime Minister Sir Winston Churchill, the French writer and philosopher Voltaire, the Austrian composer Wolfgang Amadeus Mozard, the Italian adventurer and author Giacomo Casanova, the English actor Peter Sellers, the Greek-American actor and film director Aristotelis (Telly) Savalas, the Russian poet Alexander Pushkin, the Scottish biologist and pharmacologist Sir Alexander Fleming, the Swiss founder of the Red Cross Henry Dunant, the english writer Alexander Pope, the US actor John Wayne, the Hungarian composer Franz Liszt, the English poet and novelist Rudyard Kipling, the German poet, writer and philosopher Gotthold Ephraim Lassing, the Austrian composer Franz J. Haydn, and many other figures of international renown; one thing links them all: they were Freemasons. They were members of this brotherhood, and supporters of a philosophical system that seeks to answer the question posed by all thinking men: Who I am? Why am I here? What is the purpose of life?


Dr. Panos Koronakis-Rohlf was born in Athens in 1961. He studied chemical engineeiring and continued for postgraduate studies at German-speaking Schools of Engineering in Austria, Switzerland and Germany. He holds a Phd in Biotechnology. and today he lives and works in Greece and Germany as the Chief Executive of a German multinational company manufacturing medical products. Apart from spending time with his family, he dedicates his free time to writing and photography. He is also engaged in charitable work, mainly through the Richard and Anne Rohlf Foundation, of which he is the President. He is the co-author of Ancient Greece and the Modern Manager (Kalendis, 2009), Wisdom Made in Delphi: The Commandments of the Seven Sages (Topos Books 2011) and Greek Wisdom: The Land and the People (Topos Books 2012).