This post turned out as something quite different from what I originally intended. I'd decided to write about a musician with Sun in Libra. John Lennon filled the bill, being a name everybody who's likely to read this, now or in the future, would immediately recognise. But everybody and their dogs have already presented a variety of takes on Lennon and his astrology. So, delving deeper, I decided to relate some of his songs to the planetary placements in his natal chart. 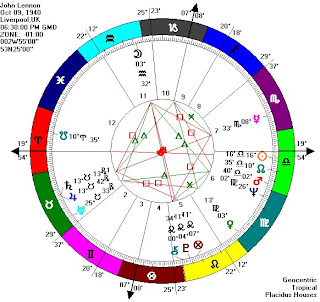 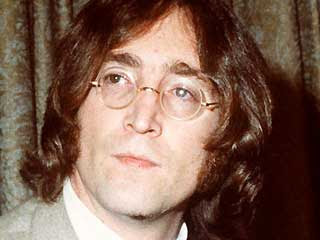 This proved to be easy enough - Lennon's output was diverse and prolific. I came up with several songs which match his Sun and Mars in Libra (Give Peace a Chance, Imagine etc.) Moon in Aquarius: Revolution, Mercury in Scorpio Jealous Guy. None of this seemed terribly intersting though. It was when I got to thinking about Venus and Neptune in Virgo that I began to look closely at the lyrics of Strawberry Fields Forever, and wondered exactly what was in John's mind at the time he wrote them. This was where the post took a turn from the route originally intended.

The lyrics of Strawberry Fields had immediately whispered "Neptune"....look:

Living is easy with eyes closed, misunderstanding all you see.
It's getting hard to be someone but it all works out, it doesn't matter much to me.

No one I think is in my tree, I mean it must be high or low.
That is you can't you know tune in but it's all right, that is I think it's not too bad.

Always, no sometimes, think it's me, but you know I know and it's a dream.
I think I know I mean a 'Yes' but it's all wrong, that is I think I disagree.

Let me take you down, 'cause I'm going to Strawberry Fields.

Neptune in John's chart is hooked into a harmonious "circuit" - a Grand Trine involving his natal Moon in the
early degrees of Aquarius, with Uranus (the unexpected) and Neptune (the mysterious, nebulous and creative) in the late degrees of Virgo and Taurus. The Grand Trine is classed as "out of sign", I understand, because Moon (inner self) had moved past the Earthy sign of Capricorn, but was still within orb of a linking trine. A whole age-group (including me) had the Uranus/Neptune Earthy trine in their charts, but it isn't always linked to a personal planet, which is what it takes to make it "potent". In my case the trine links to Mercury in Capricorn, in John's to his Aquarius Moon, lending a definite quirk to the otherwise quite sensible and solid Earth Grand Trine. That's why nebulous Neptune plays such a big part in many of John's songs, especially Strawberry Fields. 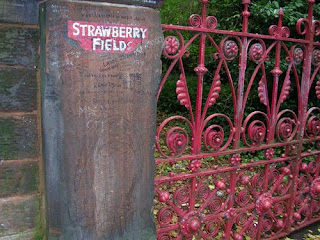 From my husband's music-related bookshelves came Beatlesongs by William J. Dowlding (1989), I learned that the song was written when John was in Almeria, Spain in the autumn of 1966, while filming How I Won the War. The song was about Liverpool, using real place names for the images they evoked. Strawberry Field was, in fact, a Salvation Army Home, an orphanage, in the neighbourhood where John grew up. He had attended parties there as a child, so the place held pleasant memories.

The book goes on to tell how the song's well-known arrangement came about, as it developed, with George Martin's input, from a sweet nostalgic lyric to "very good heavy rock". It records that in 1970 John claimed that Strawberry Fields was one of only two songs the qualified as "honest" songs (the other being Help!). From an interview quoted in the book:

LENNON: "The awareness apparently trying to be expressed is - let's say in one way I was always hip. I was hip in kindergarten. I was different from the others. I was different all my life. The second verse goes, "No one I think is in my tree". Well, I was too shy and self-doubting. Nobody seemes to be as hip as me is what I was saying. therefore I must be crazy or a genius - "I mean it must be high or low", the next line. There was something wrong with me, I thought, because I seemed to see things other people didn't see. I thought I was crazy or an egomaniac for claiming to see things other people didn't see". (Playboy 1981)

At a website HERE there's a string of comments discussing what fans see as the meaning of Strawberry Fields Forever. It's fascinatinging to note the different perceptions. One or two clips:

I had always thought the song was about about a suicidal man that was high on something. I thought Strawberry Fields was his "happy place" that he would go while high and that there was nothing to get hung about while there. However upon reading your review I agree that there could be many meanings and that it was left ambiguous on purpose.

Strawberry Fields truly were the surreal blood-stained fields in Southeast Asia, forever. Isn't it wonderful how Beatles songs have meaning across such a diversity of lives. (Here, taking a meaning implied in the movie Across the Universe).

The Across (the Universe) movie scene was very interesting but I think that, as most of the movie, it ignores the true meaning of the song as written. What most of us oldsters (age 45-56) thought at its release was, it is a comment on the working-class families in England who are so poor, that they spend their mandatory 3-4 week -long vacations in large farms picking berries for extra money, and that much of the "eyes closed" part was of ignorant acceptance or forced acceptance of their poverty and (to U.S. eyes) picking berries is not that uncomfortable. And I don't think this came from a high and mighty academic. But the personal aspect also seems to make a lot of sense as it didn't fit in as well the "let me take you" aspect, and we all know about his childhood garden and climbing across the tree to look at his neighbor's yard... I had thought of the yes and no as "know" and maybe it was about ignorance or drug-induced confusion. Anyway the modern movie, while it is extremely interesting in that scene, really misses the intended meanings of most all the Beatle songs that it uses.

After seeing the movie "Across the Universe". And having discovered there is darkness in every heart. Could the interpetation (that I derived) from a scene in the movie, possibly make easy sense???? Here is what I got :
Living in the time of so much political and world tension (Eg: The US civil rights protests and killings, US involvement in Vietnam) That he was frustrated with the world he saw (Most all would agree there). 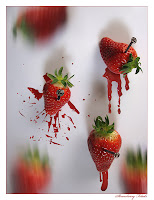 But here is where I divert: that Stawberry Fields are actually the Bloodstains left on the soil of battlefields after all the violence of the generations. He wishes you to see this? Why?? Along with the fact, that once you're eyes are opened to this darkness they cannot be closed and then you must take initiative to be a part or apart from choices that lead us there. Yes for me it was easy living with eyes closed, until through a series of very diificult situations, I find my self at times confused, and frustrated, and longing for the childhood I once had, along with that innocence I once lost.

So the song has become akin to a piece of abstract art where viewers see many different meanings, often far from what was in the artist's mind. My own explanation of the song (inasmuch as I'd ever tried to understand it 'til now) is linked to childhood memories of my grandmother, mother or aunt taking me to the strawberry fields near our home, with basket in hand, to pick strawberries, which would then be weighed by the field owner, charged for, and taken home to eat with cream. We were allowed to eat as many as we liked while picking, so the pleasant memory is of having the sun on my back and being allowed to find the plumpest reddest fruits and....YUM! "Are we going down to'd strawberry fields today then?" That was a frequently heard question in those long-gone summers - maybe it still is in some areas.

John's own explanation of the lyrics is an almost exact fit for that Grand Trine in his natal chart, linking his feeling of "being different": Moon in Aquarius; Aquarius' ruler, quirky Uranus; and creative Neptune. The interpretations of the song by those who hear it and ponder upon its lyrics link directly to its nebulous Neptunian ingredient. SOURCE HERE